The 1964 Tokyo Olympics and the 1970 Osaka Expo were the two mass events that shaped the world’s view of post-war Japan. Within Japan, they also helped to foster a new sense of national identity. And for all the visual prowess these events commanded and progress they reflected, there was a darker side to them. I will begin by looking at the 1964 Olympics. 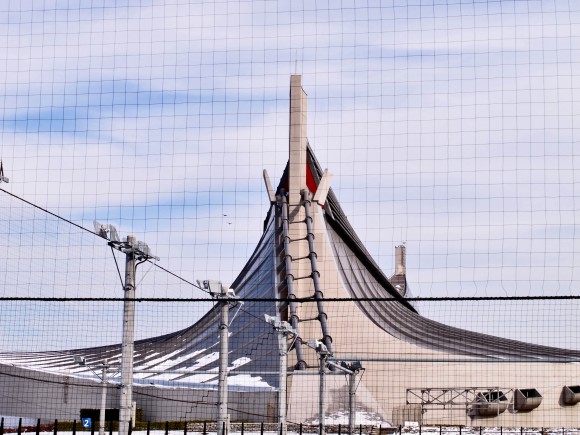 Both the 1964 Tokyo Olympics and the 1970 Expo in Osaka turned people’s attention to some of the economic miracle’s costs. The most obvious facet of that, i.e. pollution and environmental degradation, had become almost insufferable. However, in the carefully crafted narrative of Japan’s rise they were described as an inevitable side effect of prosperity and progress.

More subtle yet was the question about Japan’s identity. How had the pariah of 1945 coped with war defeat? It seemed that underneath the thin veil of pacifism and the rhetoric of Japan’s peaceful economic rise lay a partial nationalist revival. The 1964 and 1970 events were therefore very important spectacles that allowed for the reestablishment of national symbols and the reinterpretation of Japan’s past.

Beginning with 1964, the Olympics were a watershed in Tokyo’s post-war urban development and have thus come into my focus frequently over the past year. The actual transformation that accompanied the bid may be somewhat overstated given that we tend to focus on the oft-photographed construction projects, e.g. Haneda airport, the Monorail, the shuto Expressway, the first shinkansen, as well as many impressive Olympic sites.

However, Tokyo at the time was obviously still a much poorer, grimier and less organised city than we know it today. This photo I posted recently shows that the expressway from Haneda airport was an insertion into largely undeveloped land, with reclamation projects ongoing.

In 1963, almost 84% of all residential housing structures were wooden (non-fire-preventive), as opposed to (a still remarkable) 27% today. In 1964, new housing starts in Japan as a whole stood at approximately 0.75 million, far off the 1.8 million peak achieved in 1972. And while growth rates were staggering, the Japanese economic miracle had still not accumulated a great stock of wealth.

At the same time, emissions of nitrogene dioxide, carbon monoxide and sulphur dioxide tripled throughout the 1960s. Tokyo’s smog was infamous, as some of the pictures on my Tumblr are only somewhat able to illustrate. The reason for this was that Tokyo and its neighbouring cities were still very much sites of massive, lower value chain industrial production, and environmental laws very still largely nonexistent.

It is interesting in this light to watch the 1964 marathon event that took runners through the streets of Tokyo. It’s possible it is the quality and age of the film as well as conditions on that particular day, but the air certainly looks more polluted than it is today.

And while a proper response to environmental degradation still took several years (and many more scandals) to come to fruition, the pollution and cleanliness of the Games was very important to the organisers. Their campaign, however, was for a “clean Olympics”, not a “clean Japan”, and focused largely on promoting general hygiene, clean streets and planting trees.

The language employed was one of “purification” both of the physical and metaphysical. From an article on Japanese Film Noir comes the following quote:

In April 1964, Japan’s Minister of Health and Welfare announced two new linked programs: the purification of the country together with health and physical education plans. Following this announcement, the sanitation of Tokyo’s urban areas proceeded at a rapid pace, but only on a superficial level. Homeless people living in underpasses all over the city were displaced. (…) The publication of so-called ero-guro (erotic and grotesque) magazines became more tightly controlled (Sakurai 1993: 36–41). Many of Tokyo’s dirty and smelly streams and canals were covered over. Laws controlling bars and nightclubs were revised and strengthened. In short, Tokyo’s dirty, vulgar, and filthy things became hidden beneath an apparently clean surface.

An artistic response to this “purification” drive came from the Hi Red Center. Just before the opening of the Games in October, they went through Tokyo’s Ginza district cleaning the pavements using toothbrushes and installing signs reading “this place has already been cleaned”.

This purification was part of a larger effort at presenting a certain image of Japan that those organising the Games thought suitable for the world’s gaze, as Sandra Wilson argued in a 2011 article:

The Olympics may have been hosted by Tokyo City, but the Japanese government certainly treated the Games as a national undertaking, as commentators’ comparisons with wartime national mobilization were meant to suggest. The ministry of education, as noted earlier, distributed guidelines on how to stimulate patriotism among pupils. In more concrete terms, campaigns were implemented before the Games with the aim of improving public behaviour, commercial activity and trafﬁc; and of beautifying Japan physically. In the interests of public safety during the Olympics, the police began to step up arrests of people who behaved suspiciously, the mentally ill and troublesome drunks. The British sports journalist Christopher Brasher claimed that ‘One of the Japs’ great worries is that the stray dogs will interfere with the marathon runners, so they have imported several hundred dog-catchers to chase all the mongrels away’.

What kind of image, then, was to be conveyed? Japan (and there is a problem in personifying a nation, but likewise would it be simplistic to ascribe all this to a “conservative Japanese government”) was keen on normalising its image in the world and at home.

This meant a reactivation of previously shunned nationalist symbols, most notably the hinomaru flag as well as the tenno (emperor), who nineteen years after his surrender presided over the opening ceremony. By enveloping these nationalist symbols into a seemingly apolitical sporting event, the organisers were able to avoid controversy.

The selection of final torch runner Sakai Yoshinori was also problematic: He was born on the day the nuclear bomb was dropped on Hiroshima. His prominent role in the opening ceremony “subtly emphasised Japan as a victim rather than perpetrator of the events of WWII”, as Christian Tagsold has argued.

Just nineteen years after the end of the war, history was being rewritten largely “by omission”. The conservative strands of society led by the Ministry of Education, had succeeded in normalising the display of national pride. The Olympics, whose opening ceremony were watched by the overwhelming majority of the Japanese population, were the perfect arena.

This was to be the case again six years later at the Expo in Osaka, to which I will turn in a later post. I also want to explore (briefly) in how far Japan’s experience can be contrasted with Germany’s.