The Museo Xul Solar is devoted to the artist’s extensive work spanning several decades and various media. The building is an architectural masterpiece that connects various old structures, including Solar’s flat at the top, with cast concrete staircases, mezzanine floors and open spaces. 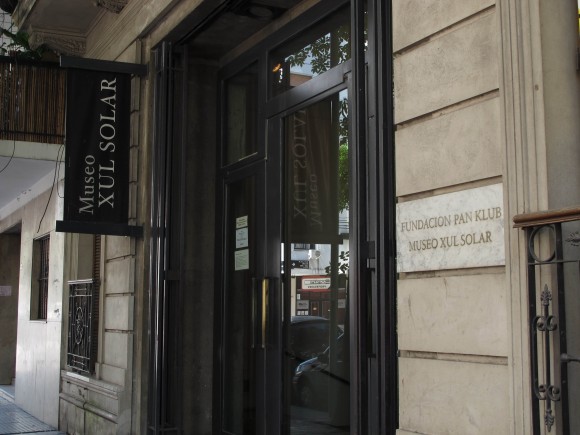 Although Solar is most famous for his watercolour paintings which are often brought in connection with Kandinsky and Klee, his oeuvre is much more of a Gesamtkunstwerk and a single blog post can hardly do it justice.

Born in 1887 in Buenos Aires province as Oscar Augustin Alejandro Schulz Solari, he trained briefly and unsuccessfully as a musician and architect before embarking on a twelve-year sojourn to Europe. Here, he turned into a painter inspired by the changing world around him.

Solar was interested in languages (speaking five of them fluently), literature, mathematics, music, ancient art and the occult. He created a new language and employed the duodecimal scheme when working with numbers. He also invented new piano-like musical instruments that were based on colour.

Many of his paintings depict scenes from a pre-Columbian era, yet many others deal with global issues. Famously, Solar was a close friend of Argentine writer Jorge Luis Borges.

To me, Solar’s visualisations on architecture were the most interesting facets of his work. For one, that is because the museum itself is so impressive architecturally. The visitor finds many of the elements from his paintings realised here, amongst them the oblique staircases and seemingly unnecessary spaces, which altogether create an amazing feeling of space.

The other reason his architecture is interesting comes via the connections to the European avant-garde. This piece on display in the museum was fascinating although a little tough to fully comprehend for the uninitiated.

It seems like Solar was inspired by some of Bruno Taut’s early works (such as the glass pavilion he built for a 1914 exhibition). In fact, the connection is more obvious between Solar’s painting “Cine-Teatro” and Taut’s Falkenberg designs. Solar could have also come across Rudolf Steiner’s late architectural works, such as the Gotheanum.

Architecture as art, buildings without a specific function but in dialogue with the art displayed inside them – all this makes immediate sense in the Xul Solar museum, a place not be missed when in Buenos Aires.

We weren’t allowed to take photos while inside the museum, but Flickr has plenty of them to give a good impression.