Junzo Sakakura (1901-1969) was one of the fathers of modern Japanese architecture. He left a huge legacy in the built environment of post-war Tokyo, perhaps most notably through his designs for Shinjuku and Shibuya stations. 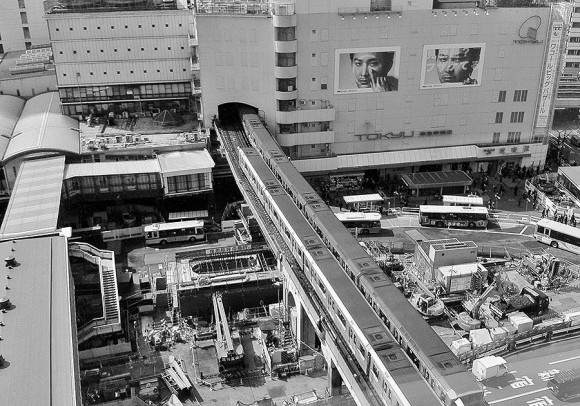 Shibuya station seen from the east

I recently bought a book about Sakakura and his practice which was published in 1993 by Process Architecture, a Japanese magazine that started putting out their bilingual quarterly (?) in 1977. It seems to be one of the best available sources of information on Sakakura in English. Much of the information and some of the old archive photos are from there.

Sakakura was the second of three Japanese students in grandmaster Le Corbusier’s atelier in Paris. He joined in 1931 and eventually rose to studio chief during his five-year spell. His 1937 Pavillon for the World Expo in Paris was his first notable work and somehow a fitting culmination of his stay in Europe. The German Weltwoche opined back then:

Out of all the pavilions at the Paris Exhibition which were built with an open feeling the Japanese pavilion is probably the most beautiful. Slopes of varying gradients pass through the center of the building, linking each part and leading both to the outside as well as to the inside. Despite having small rooms, the fact that they are united with the garden can be felt more than anything else. Although the pavilion is western in style, a complete feeling of a Japanese spirit has been achieved. The name of the architect who is in his thirties, Sakakura, should certainly be imprinted upon our minds.

During the war, Sakakura like many architects of his generation (including Kenzo Tange) was involved in planning for Japanese expansion in Manchuria, drawing inspiration from his former teacher’s “Ville Radieuse” plans. 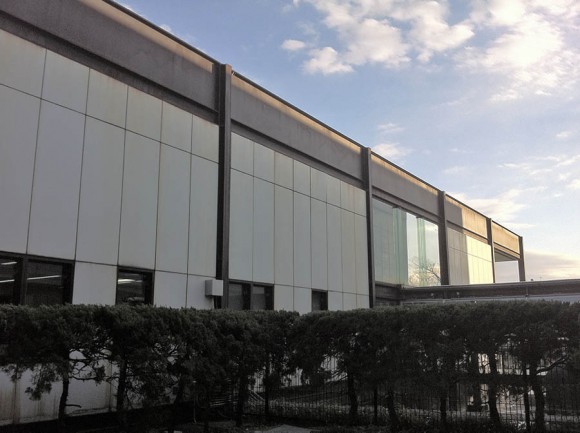 In 1951, Sakakura built Japan’s first modern building after the end of World War II, the Kamakura Museum of Modern Art (above). His office also took care of the annex built in 1984, long after Sakakura had died. 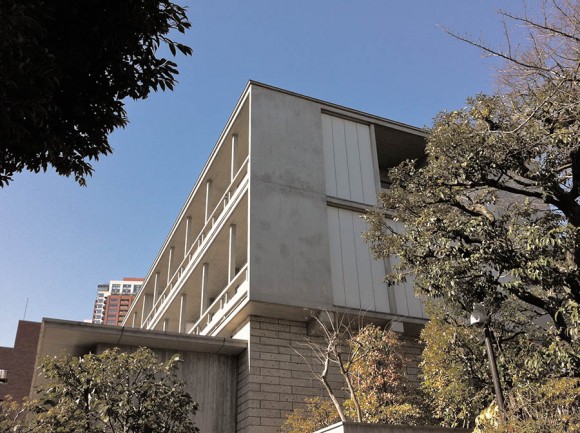 In 1955, Sakakura cooperated with Maekawa and Yoshimura to build the International House Japan in Tokyo’s Roppongi district. It was designed as a place for intellectual exchange. In 1960, the Metabolists wrote much of their namesake manifesto here. 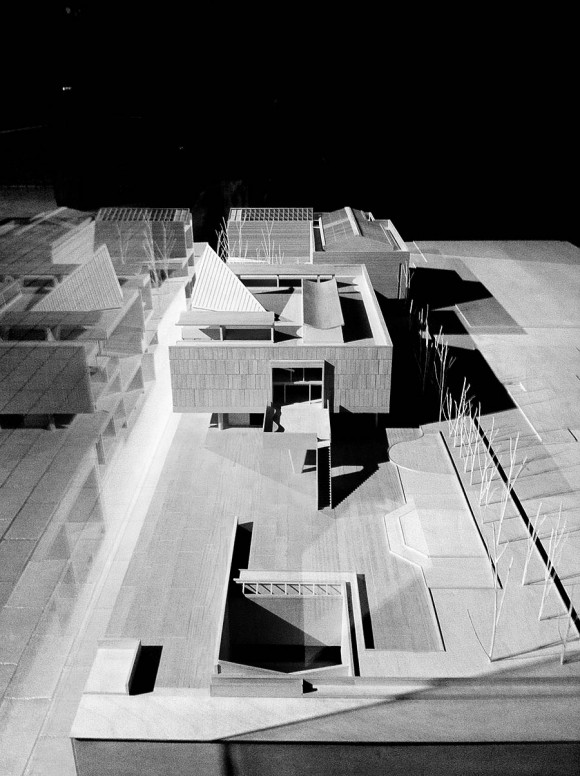 Sakakura, Maekawa and Takamasa – Le Corbusier’s three Japanese “disciples” – helped their master when he came to Tokyo in order to build his only work in Japan, the Museum of Western Art in Ueno Park. Above is a scale model of the museum on display inside. 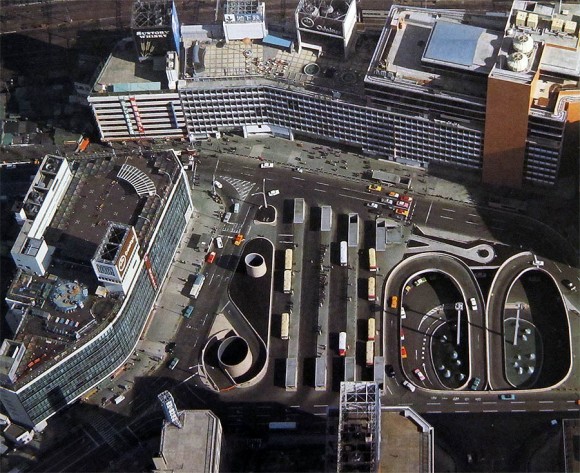 Possibly the most important work of Sakakura was the West Plaza of Shinjuku Station, today the busiest train station in the world. The Plaza became famous also because of the protests that were staged here in the late 1960s and that brought to the fore the debate about the definition of “public space” in Japan.

Hardly any other architect could build with such intensity and impact as Sakakura did in his Shinjuku and also Shibuya station surroundings; at a time when the Metabolists were largely confined to making scale models of their grand designs, he and his colleagues oversaw some of Tokyo’s biggest urban renewal projects. 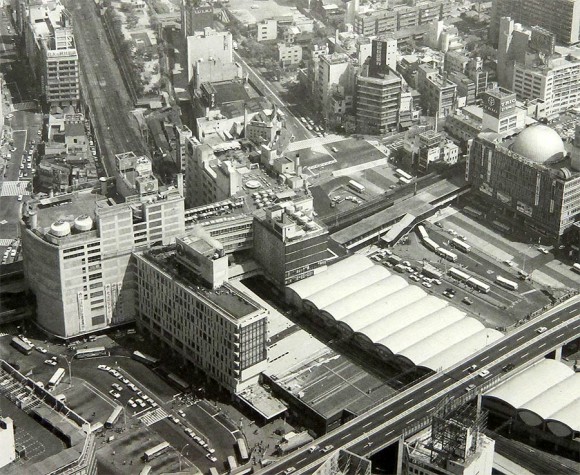 Somewhat less known, Sakakura also did the Shibuya station redesign that had begun as early as 1952. At the request of Keita Gotoh, then head of the Tokyu railway corporation, work around Shibuya would include the now-demolished Bunka Keikan building as well as the original Tokyu shopping centre (which can be seen here from the other side of the famous Shibuya crossing).

Sakakura’s buildings were not revolutionary. Yet they mirrored the “zeitgeist of an emerging Japan”, as Nicolai Kruger put it in this exhibition review. As the Japanese economic miracle had entered its second decade, debates on how to live together in the urban space gained intensity.

Sakakura was probably too old to be part of Japan’s architectural avant-garde that formed around the Metabolists. Nonetheless, his buildings contributed to Tokyo’s actual functioning, no unimportant achievement given how bleak future visions of the city had become by the early 1960s.

By working together with big industry such as the cutthroat rail corporations, Sakakura had to sacrifice some of his visions. As regards Shinjuku’s West Plaza, for example, Jordan Sand’s recent “Tokyo Vernacular” describes that…

…[d]iscussing the design in the journal Shinkenchiku in 1968, the architects expressed their frustration that the master plan had already been set before they were brought into the project, thus limiting their role, and that the plaza was conceived primarily for vehicle traffic, with no consideration given to pedestrian-level vistas of the building facade.

Sakakura Associates continued to work after Sakakura’s death in 1969 and exist to this day. Some of the firm’s buildings that I came across include residential projects near Shibuya, such as Villa Moderna (1974): 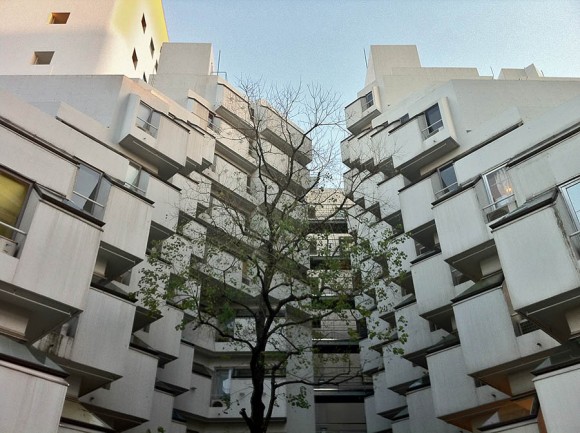 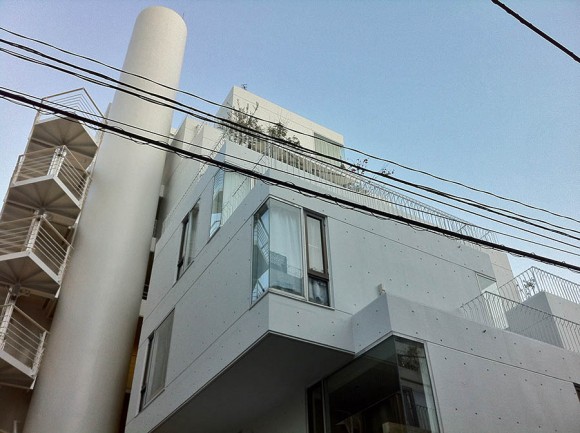 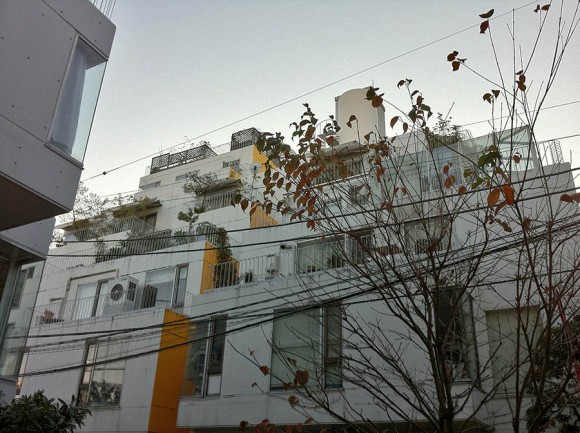