The 1980s are often described as the “lost decade” for much of the second and third world. East Germany was partly able to avoid economic malaise. That was partly the case because Japanese banks kept the tabs open while relations between the GDR and the East Asian miracle nation blossomed. Some further historical anecdotes after the jump. 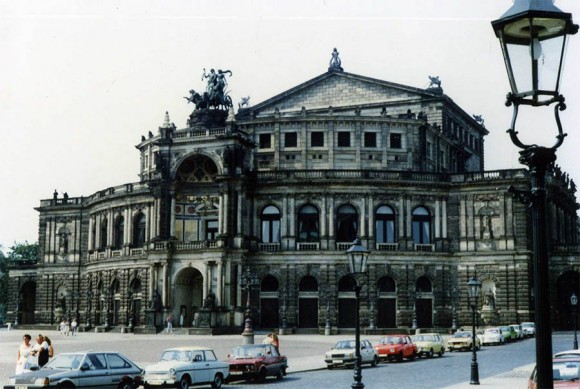 Two icons of the 1980s GDR – Semperoper in Dresden and Mazda 323 parked to the far left next to more common vehicles Trabant, Lada, Skoda, and Wartburg; by Flickr user Felix O (creative commons)

As briefly described in the last post on Kajima Corporation’s engagement in East Germany, full diplomatic relations between the two countries were officially established in 1973. Japan’s more important partner West Germany had eased strained bilateral relations with its East German neighbour. Engaging with the socialist state was now no longer deemed a problem.

Already before that, though, active trading relations existed, especially those involving large-scale industrial projects: Japanese firms, for instance, built an ammonia factory near the East German town of Wittenberg in the early seventies. Japan also exported steel, while the GDR delivered precision optics. Mainly thanks to the combine Carl Zeiss in Jena, East German optical systems had remained globally competitive.

Once Kajima’s trade centre was finished in 1978, more than a dozen Japanese firms set up shop in East Berlin. The infrastructure for more interaction between the two sides was thus in place. External developments helped. As economic problems in the socialist bloc gained pace, the GDR received increasingly higher bills for Soviet crude oil and refined oil products.

In retaliation for that, in 1980 the GDR reneged on a promise to buy a Soviet-licensed TV factory and bought one from Japan instead (although in trying to do some research on which television sets I am not quite sure which model featured Japanese technology).

A year later, in 1981 (a month before I was born), General Secretary Honecker visited Tokyo and, as usual for such visits, carried some signature-ready deals with him.

The most famous one was the purchase of 10,000 Mazda 323 for a total value of USD 40 million. Western-made cars were still an attraction on the streets of East Berlin and I remember being excited when seeing a Mazda. For most East Germans, however, they remained out of reach. We too had to make do with our yellow Trabant. 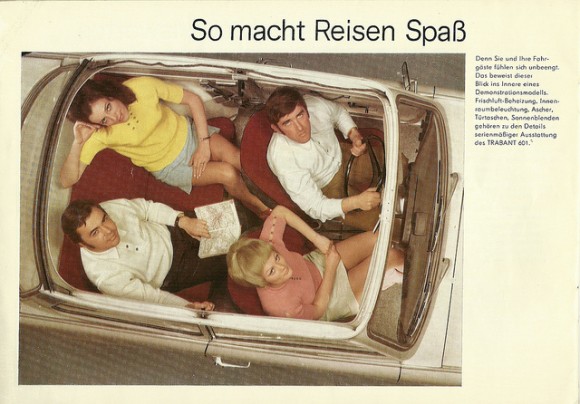 Other deals (such as the purchase of an oil refinery) were also sealed around that time. If it had been for the Japanese side, the 1979 bilateral trade figure of 1.3 billion Marks could have easily quadrupled.

However, there was one chronic problem: the GDR was running low on hard currency which it needed to trade in foreign goods and which Japanese firms expected to be paid in. The GDR’s own currency, the “Ostmark” was not convertible on international (i.e. Western) currency markets.

The GDR was trying to economise where possible: The Hotel Merkur deal in Leipzig, for example, was at least partially pre-financed by the Japanese in exchange for guaranteeing Kajima a share of the future hard currency cash flows.

Other ways in which the GDR tried to increase hard currency holdings were notorious: forced exchange when visiting the country, “Intershops” where East Germans could spend their own precious Deutschmarks (which they were often given as gifts from West German relatives) in exchange for Western goods, etc.

Yet borrowing became another, if not the most important tool to access foreign exchange. As early as 1973, the Industrial Bank of Japan extended a USD 100 million loan to the GDR. The terms were seemingly generous – a 12-year tenor with amortisation kicking in after six years.

Increasingly Japanese lending took on an ever more sizeable character. By the late 1980s, Japanese banks held an estimated three quarters of the GDR’s hard currency external debt (see here as well as the comment on my previous post by noted expert and friend Gareth Dale).

Exact data is very difficult to come by as both GDR and Japanese banks were notoriously opaque. Because the latter were so awash with cash (mainly due to inflated values on their balance sheet), they were looking far abroad for their lending and not only the GDR, but a large part of the Eastern bloc would receive Japanese loans.

When the political situation in the GDR began to change rapidly in 1989, Japanese banks allegedly called up their East German debtors. They asked whether the flight of thousands of citizens via the Hungarian-Austrian border was to negatively influence debt repayment.

But as the Berlin Wall fell in November, Japan was only months away from its own era-defining event – the bursting of the stock market. It heralded the begin of Japan’s “lost decade” – the end of the Japanese economic miracle.