The New York Times ran an article about Kazakhstan’s rail network the other day. It made me think both of the country that I have had the pleasure of visiting frequently and a growing interest in the interdisciplinary world of spatial economics. Some hopefully related thoughts after the jump. 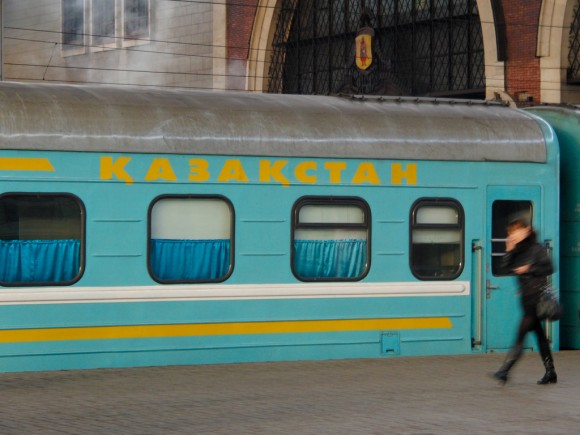 The challenges for a rail operator here are enormous. At five times the size of France, Kazakhstan is a vast country with a relatively small population (17 million). As a former Soviet republic, it inherited a railroad grid that had mainly been designed under a planned economy. The first railroad traversing the territory of today’s Kazakhstan was built by Tsarist Russia and served colonial purposes.

That’s perhaps not the ideal heritage for a modern railroad grid. Even at much higher per capita GDP levels, the country’s population and its dispersion would not really warrant all-encompassing passenger rail service unless you’re not very fussy about economics.

Yet Kazakhstan’s railroad is predominantly a story of cargo. The country’s economic structure necessitates the moving of huge quantities of natural resources across the country.

Oil and gas, mainly in the country’s west, are surprisingly often transported by rail. The largest oil field, Kashagan (or “cash all gone” as it has been dubbed recently) is no exception to this. Kazakhstan is also a huge grain producer and exporter, and again most of this is transported via rail in pretty much all directions. Other major products, e.g. from the country’s large mining industry (coal, copper, etc.), are also being shipped via rail.

As a result more than half of the country’s cargo is transported on the back of trains if you add pipelines to the total transportation mix. The figure is an astonishing 75% if you don’t. Compare that to 43% US (which has one of the highest shares of any rich country and shares some of Kazakhstan’s spatial characteristics).

Given Kazakhstan’s economic structure and its geographic realities, a decent cargo rail system is absolutely essential. Cargo rail doesn’t need to be fast, as the average speed is far below 100kph. Security is also less of a concern. This makes upgrading and maintaining cargo lines much cheaper than their higher-speed passenger equivalent.

It can be disappointing for an aspiring country like Kazakhstan to see a prospering cargo rail operation across the country not translate into state-of-the-art passenger transportation. This is a bit similar to the situation in the United States, where efficient rail freight compares extremely favourably to a moribund passenger system.

Profitable long-distance high-speed passenger rail is hard to achieve even on an ongoing basis without accounting for the upfront cost.*

In a country as sparsely populated as Kazakhstan, there is obviously no real agglomeration like in the US along the Northeast Corridor, China’s coastal provinces or Japan’s Taiheiyo Belt. The two major cities, Astana (capital, altogether about two million inhabitants) and Almaty (ex-capital, about one million) are more than 1,000 kilometres apart.

In a sign that the Kazakhs are not so fussy about economics after all, a high-speed passenger rail line between the capital Astana and the major business metropolis Almaty was suggested earlier this year. It would have cut travel time from 12 to 5 hours.

Surprisingly, however, president-for-life and rail buff Nazarbayev suspended the project last week, citing overly ambitious economics for the 1,000km+ route. You cannot deliver an investment like this profitably it seems, so it is a sign of maturity that it got stopped (call it legacy management by the risk-averse ruler – he is widely held to abdicate within the next years).

I took the train between Astana and Almaty in 2008. The Kazakh government had taken out a loan from Spain to purchase the Spanish Talgo high-speed train for the route. Still the average speed was much lower than what the rolling stock had been built for. One had to wonder what point other than prestige there was to purchase “high speed” equipment.

A new “high-speed” route between Astana and the north-western city Aktobe was opened last year. The travel time was cut from more than 24 hours to about 16, again less than 100kph average speed (but a great improvement over the previous situation).

In the meantime, KTZ has been tapping international capital markets to fund its expansion and modernisation, e.g. last year in a $800 million bond issue. Investors are eying a listing of at least parts of the company’s business on KASE, the Kazakhstani stock exchange.

In a country that does not issue sovereign bonds, getting your hands on KTZ is about the best way of getting exposure to the sovereign. As KTZ is state-owned, it is a so-called “quasi-sovereign” credit (although, technically, there are no cross-default provisions in the bond prospectus). Its investment grade rating reflects that and is fundamentally higher than if the company were on a stand-alone basis.

An alternative would be for the Kazakhstani government to issue debt itself (more cheaply) and inject capital into the company via direct budget transfers. Yet KTZ, a corporate entity reporting to a sovereign wealth fund and not the government per se, may be more “disciplined” and efficient when allocating resources. At least that’s how the theory goes.

The future will probably see further separation between KTZ’s passenger, cargo and infrastructure divisions. This would allow the government to subsidise more directly the loss-making sections, mainly the passenger arm.

After all, KTZ’s future has a huge social dimension. Hardly any other country has so many rail workers as a proportion to its population. One in 111 Kazakhstani citizens works for KTZ (compare that to 153 Russians, 630 Japanese and 923 Indians).

*On a more general note, it is interesting how the big landmass countries like Russia (+ CIS), the US (+ Canada and Mexico) as well as China rely on cargo rail and how little it is developed in Europe and Japan. The economies of scale and distance work differently here than in passenger transportation.