The built context of most Tokyo buildings shown on this blog has been radically transformed since their completion several decades ago. It is now almost strange to see these architectural icons stand in their “native” setting or while they were under construction. Thanks to Flickr and Tokyo Tower, we can even have a look further back. 1 December 2013: Update now at bottom of post, 23 February 2014: Another shot at bottom of the post. 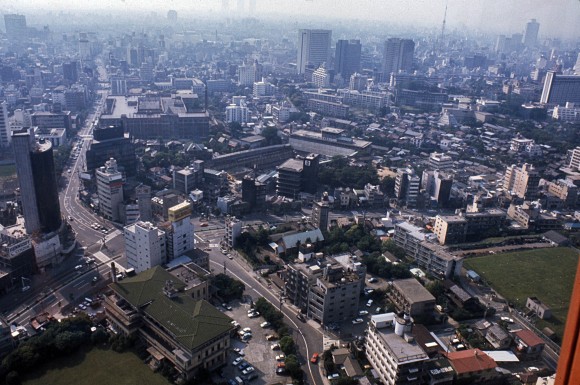 Both NOA Building and Reiyukai Shakaden under construction May 1974, photo posted with permission from Flickr user CosmicShip

333-meter-tall Tokyo Tower opened its doors to the public on 23 December 1958. Two observation platforms, the lower at 150 meters, the higher at 250 meters, have meant that for decades, tourists have been taking photos of the evolving urban landscape at their feet. 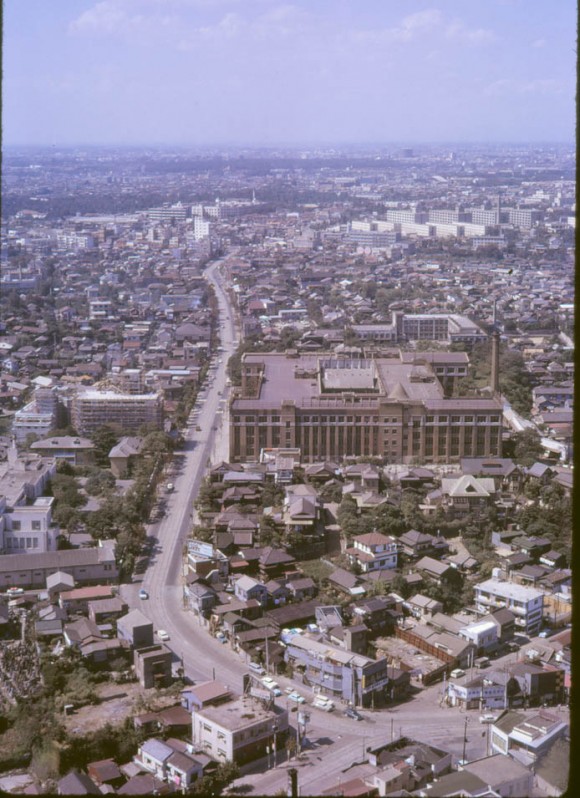 Take for instance the shot above, taken by a US Air Force officer in 1961. It’s the view down Gaien Higashi Dori towards Roppongi. The Azabu Post Office (1930) is the main landmark that had already been around back then. The area looks unfamiliarly suburban. 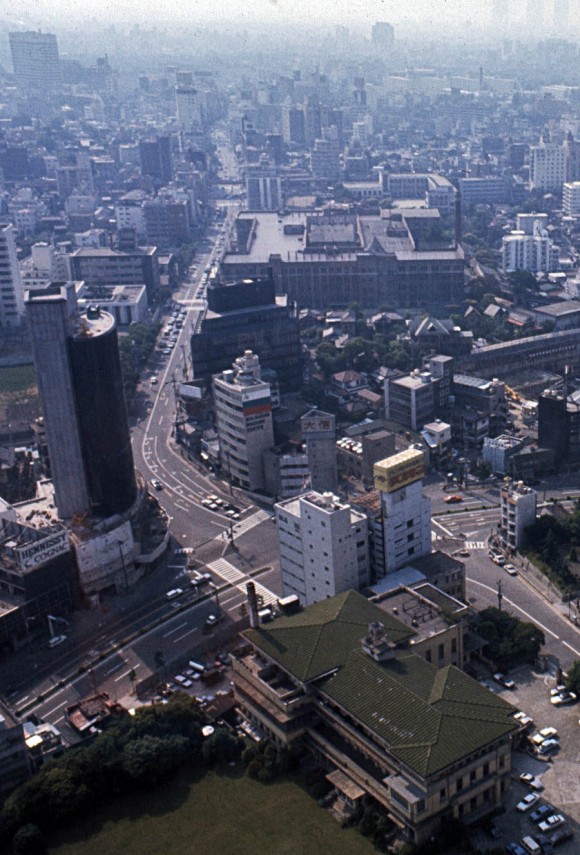 Just thirteen years later, the picture had changed dramatically, not only for the arrival of the NOA Building, which was just about to be finished by the time the photo was taken in May 1974 (above crop from CosmicShip’s photo). The whole urban form seems much more similar to today’s Tokyo.

CosmicShip told me via FlickrMail that the smog the day he went up to the tower was unbearable. The photo shows that on what seems like a clear day one can barely view past Roppongi.

Over the next forty years, the environment has again changed dramatically. The smog is largely gone on most days, and new buildings dot the streets (photo courtesy of Steeljam, creative commons). Quite remarkably, apart from Roppongi Hills, Akasaka and distant Shinjuku, Tokyo has remained relatively low-rise.

Update: I realised you can of course play with this beautiful 360-degree panorama to match the perspective of each of the vintage shots and do your own “before/after” comparisons. 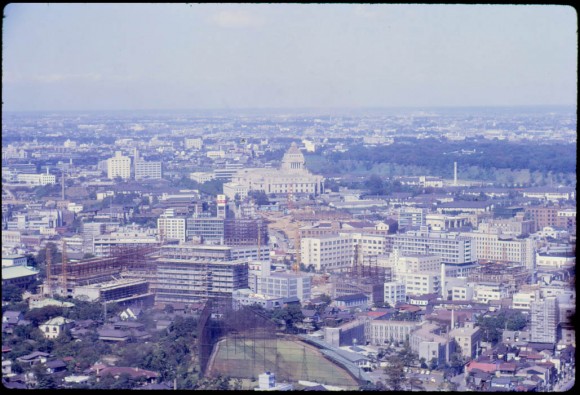 Towards the north, a similar picture emerges. Above is another shot by William M. Green / monceau (copyright, reprinted with permission), this time towards the Diet Building. As it is 1961, the Hotel Okura is just being built (note the cranes towards the left of the image). None of the high-rises that would later dot this area have been built yet. The Building Standard Act, limiting building heights to 100 Japanese shaku, or 31 meters, was only revised two years later, in 1963. 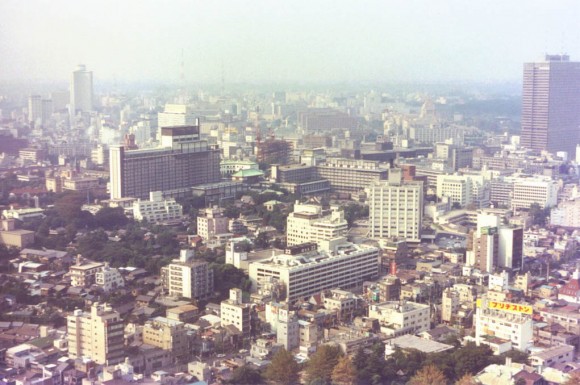 The photo above, by Flickr user edgarjlaw, shows how the area had been transformed by 1975. The New Otani Hotel’s Garden Tower (top left of the photo) was Tokyo’s tallest building (next to Tokyo Tower, that is) from 1964 until 1968. The Kasumigaseki Building on the right, Japan’s first skyscraper, then took the crown, reaching 147 meters into the sky. The Hotel Okura South Annex (centre left) opened in 1974 and is connected to the main building via an underground walkway. 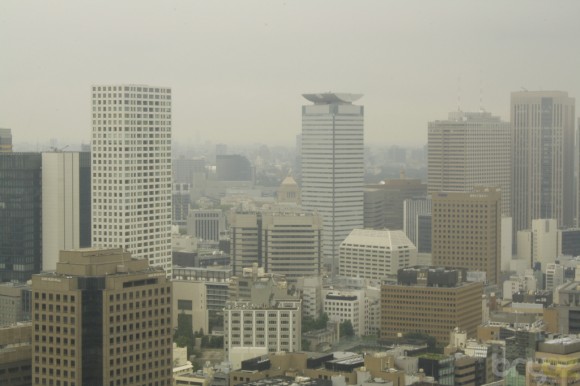 Above is a photo into the general direction today (photo by bryoz, creative commons). The Diet Building is just visible through the tall buildings and in that particular day’s haze.

On another crop from CosmicShip’s photo, one can see the massive building pit for the Shakaden as of May 1974: 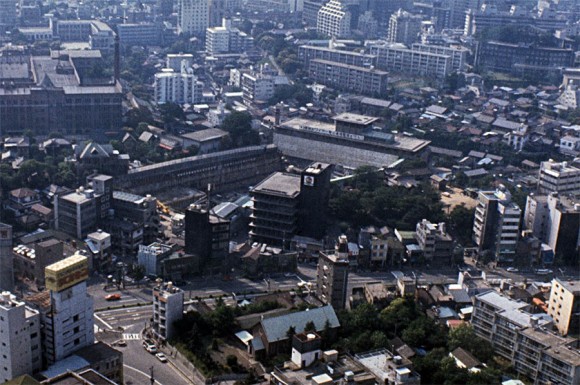 Just one year later, in September 1975, the Shakaden is already almost finished, as can be seen from this photo by Flickr user edgarjlaw:

Check out my earlier post about the Shibuya transformation for some more before/after shots from Tokyo.

1 December 2013 update: Courtesy of Flickr user johnrellis, we can look at yet another shot taken from the tower into the direction of Roppongi. The user’s father took the picture in 1969, on what must have been a particularly smoggy day. The corner lot later to be occupied by the NOA Building is empty.

From Tokyo Tower Number 3 – by johnellis (reproduced with permission) 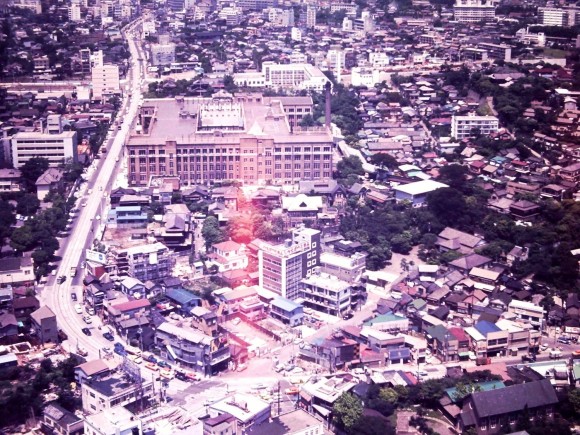