The Adam Clayton Powell Junior State Office Building divides Harlem geographically. It also divides opinions. Some call it a Brutalist eyesore from the urban renewal era, others think that it is an important memorial, commemorating the battle for the soul of Harlem. 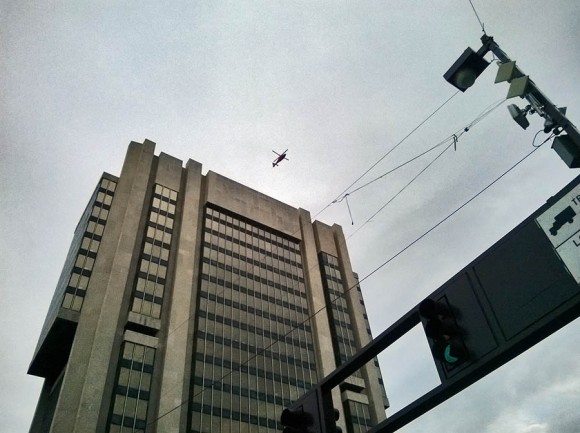 It is named after, yes, Adam Clayton Powell Junior, who was the first US Congressman of African American descent. He was also the only one for quite a while, and while so he famously stood up to racist southern politicians.

Construction work started in the late sixties, but was halted in 1969 as local and predominantly black residents protested against what they perceived as a white attempt at “reclaiming” Harlem. This poem was distributed at the protest site:

There is no reason in the world
for us to believe that that building
is in the interest of the people of Harlem
That building is like a dagger
pointed at the heart of the community.

Monique Taylor’s Harlem: Between Heaven and Hell has a great section on the State Office Building’s construction and the protests that ensued. The eventual renaming of the building in honour of Clayton Powell Jr. as well as the renaming of various avenues after famous black leaders was widely seen as appeasement towards the local black community for having been disadvantaged during the area’s redevelopment.

This is very topical today, as Harlem is fast gentrifying.

But back to the building: you can’t miss it on the corner of 7th Av / 125th Street. It’s big and sticks out from its predominantly low-rise neighbourhood. The Project for Public Spaces lists it in its “Hall of Shame”, calling it a “killer building” from the urban renewal era. The following picture, also taken with my Nokia Lumia 520’s grim camera, makes this point a little clearer. 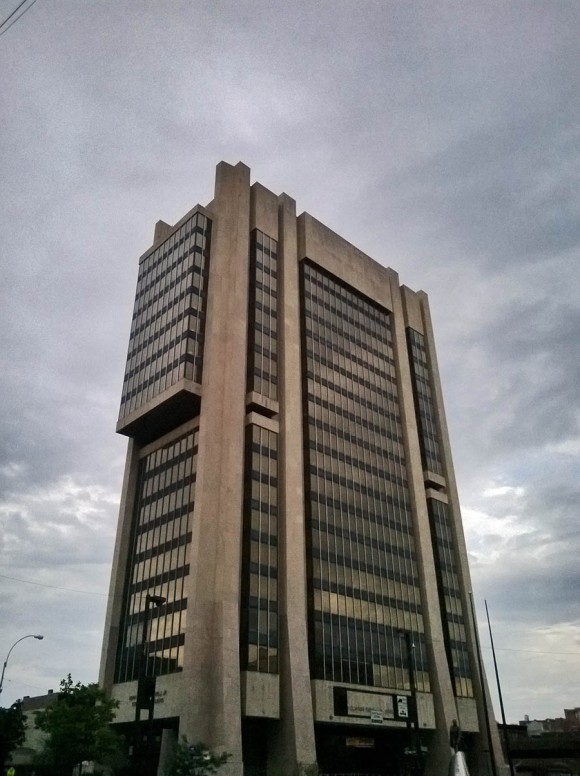 The description on the Project for Public Spaces website finds no nice words:

(…) Elevated on massive stilts at least one story above the ground, the government facility has a distinctly Orwellian feeling, which is reinforced by the fact that the entrance is impossible to find. An already forbidding edifice is made more so by a windswept plaza, which covers the entire site (because the building is elevated). The place is scorching in summer and Siberian in winter, and there has been no evident attempt to make it habitable for humans. (One glimmer of life has been the return of a seasonal farmers’ market to the building’s plaza in the summer of 2001.) Overall, the combined effect of the building and its plaza is enough to make pedestrians run to the other side of the street, preferring the shelter offered by the brick row houses that remain.

When the state built this monster it undoubtedly destroyed scores of brick homes and shops of the kind that can still be seen crouching in its shadow, their occupants presumably trying to get over the fact that even if they’d been hit by a SCUD missile, their neighborhood could not have been more effectively disfigured.