I haven’t lived in Germany for many years, so I am not really confronted with the consequences of my voting behaviour. This has made me a very opportunistic voter in the past; going on wahlomat.de and making my cross at whichever party suits me best based on the website’s questionnaire. 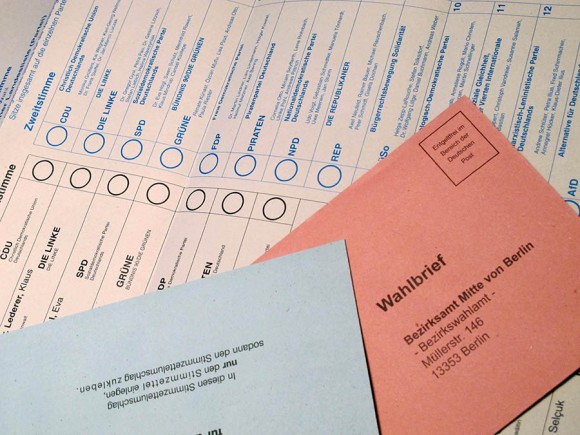 Unfortunately, this has led to some debatable decisions and disappointments in the past. Now, I am pondering how the major parties likely making it into the German parliament really differ from each other. It seems like at least the four “mainstream” parties (CDU, SPD, Greens, FDP) offer differing shades of grey, especially in terms of economic policy.

Wolfgang Muenchau recently lamented the social democrats’ lack of ideology. Their economic policy appears a tad milder than that of the CDU, but adheres to the same logic of supply side economics. We need to be austere, yes, but save a little less here, and more there.

Gone are the days in which the German voter was really presented with big choices.

Voting for the populist Linke left party is that choice for some, but the party is slowly but surely condemning itself to become the loudspeaker of the precarious class. In the German political landscape, that’s perhaps needed, but I will reserve my vote for someone else.

What about nullifying your vote? Reading Seeing by Jose Saramago had a big influence on me. In the book and in an outright rejection of the political system, 95% of the electorate vote for neither of the presented choices and hand in empty ballots. Alas, this would not work in Germany, where the pie is divided according to valid votes.

What about a strategic vote? While I do not agree with many of the social democrats’ policies, I would want them to be more true to their original colours. If they get a strong result, it will most likely result in them being the junior partner of the CDU in a grand coalition.

If they keep their current profile in such a coalition, I would expect them to do extremely badly in 2017, perhaps threatening the existence of the German two “Volksparteien” system, in which CDU and SPD would delineate the centre of the political spectrum, augmented by possible coalition partners on either side.

So in a way I would like that to happen. I want the SPD to suffer four more years of being in the government.

Perhaps they come to their right mind then and begin to offer a true alternative to the policies of the CDU if they see their poll ratings plummet as they did after four years of a grand coalition in 2009. They also need to start talking to die Linke / left party or risk being caught in opposition or junior partner role with the CDU forever. Get real.

I don’t know whether I’d vote for them now or in this hypothetical reformed future, but I think the political discourse and the political landscape in Germany would be better off with a true social democrat alternative while Keynesianism is having a bit of a revival around the world.

That doesn’t answer where I’m going to make my cross this year. For that, I’ll go to to the Wahlomat. How convenient, isn’t it?