Part of the past occupation series: As I prepare my third (and entirely touristic) trip to Beijing and Shanghai this December, I find that China is really the one big topic from my previous job that continues to fascinate me in my new daily life.

Trying to get to grips with China quickly became my favourite task at work, especially in the latter part of the job when I was responsible for formulating more global macro views. Although the country is neither a big fixed income nor equity market (at least for foreigners), it matters a big deal for all the obvious reasons.

I remember long and detailed discussions with one of my colleagues. We would fill flip chart after flip chart with models on China’s state-owned enterprises, its banks and theories of financial repression. Our discussions could get heated. He was more of a bear, I was a bit more bullish. For whatever that may mean today! If anything, I think he was right.

Although I had been to Xinjiang in 2004, I only visited Beijing five years later – for a whole comfortable week of tourism flanked by one and a half days of meetings with the usual mix of policymakers, analysts and diplomats. I coincided with one of my best friends from uni who had studied Mandarin for four years and had just finished a politics course at Nanjing University. I think I learned most about contemporary China from him.

We lodged in a fairly run-down but comfortable and authentic guest house in downtown Beijing, not too far from the Bell Tower. 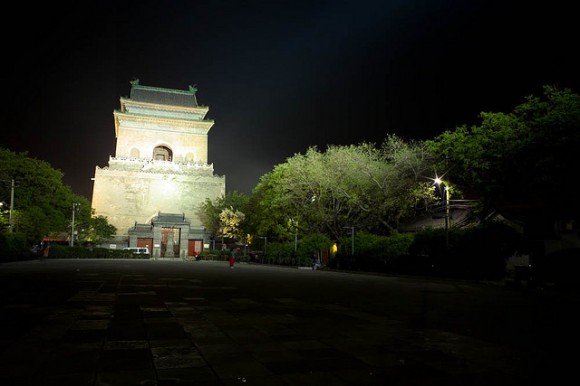 When I compare Beijing with Tokyo from the comfort and distance of my armchair now, I must say that I was really impressed by the sheer sense of gravity (for the lack of a better word) that can be felt on the streets of China’s capital. History is omnipresent in Beijing yet a full-scale urban transformation is ongoing at a rapid pace, too. Perhaps the slightly authoritarian atmosphere adds to this heavy air.

I liked the contrasts: huge ten-lane thoroughfares cut through the city in a geometric fashion, with traffic roaring in all directions. Yet behind the noise unfold the intimate backstreets of the hutongs, with old(er) and smaller buildings and temples dotted alongside much more cosy roads.

The slow destruction of these traditional parts of the Chinese capital was evident and its nuances pointed out by my local hosts, although the pace and scale was not to be compared with what I had seen in Kashgar back in 2004 (and which has got much worse ever since).

Going back to Beijing two years later in 2011 I went on one of my more surreal trips while in asset management. It lasted only two and a half days altogether: I arrived on a Sunday morning, cycled through Beijing on a hotel-provided bike, went to an equity conference on Monday, had a few one-to-one meetings on Tuesday, followed by dinner with university friends. I flew back on an overnight service and sat on my desk again on Wednesday. China seemed strangely close on that trip.

I recall a meeting with a risk consultant in the legendary CITIC building, dating from the 1980s. It used to be China’s first Western-oriented business skyscraper and still houses an eclectic mix of foreign companies, all with a slightly dilapidated charm to it. A charm that tells you something about how far the country has come from its early and careful advances to embrace capitalism in the Deng Xiaoping era.

My ambition to understand China grew, as did the awe at perhaps not being able to get a proper “handle” on a country so big and complex. Yet the place seemed accessible still, signified perhaps by discussions about monumental challenges of global importance, and having them with senior US diplomatic staff over a cup of coffee in a Starbucks across the street from the embassy.

Then, rushing from meeting to meeting in a city I don’t know by taxi bodes ill, especially given the language barrier. But even that appeared easy: I handed the taxi driver my mobile phone, let my next meeting sort out directions with him, and then enjoy a swift and unproblematic ride.

A highlight as in any country was meeting national officials – I recall a senior staffer of the Statistics Bureau. He made himself look like a renegade official when he presented his diverging views on official growth estimates. He “disagreed” by 0.2% or something as minute. But he was rather conspiratorial about it.

As said, China keeps me busy intellectually. I really enjoyed this book here, and have a nice array of mainly economic blogs I follow.

I expect this blog to be having more China posts as time passes.