To my surprise, one of Europe’s biggest urban regeneration projects is slowly taking shape close to where I used to live in London. Woodberry Down is an older estate and one of London’s most iconic. Practically all buildings will be torn down to make space for a very ambitious development. I took a stroll around here last weekend. 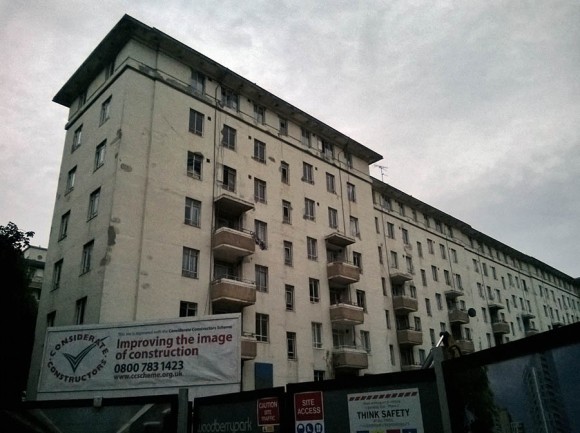 Woodberry Down is near the Manor House tube station, towards the two water reservoirs in Stoke Newington. The striking eight-storey residential units were built in the 1940s and resemble modernist tendencies that had infiltrated the British Isles from the Continent back then.

The big tower blocks are complemented by smaller structures. The estate plan as a whole largely echoed Swedish schemes in which various designs of different height accommodated a wider variety of families and age groups.

Another clear influence is the nearby Evelyn Court estate on Amhurst Road, which I used to pass each morning on the train into Liverpool Street. Built in the 1930s, it is reminiscent of inter-war German architecture and pioneered some of the innovative construction methods also used in Woodberry Down.

As the zeitgeist moved towards tower blocks and the beginning of Brutalism dawned on British social housing (e.g. here, standing close where I am now), the Woodberry Down buildings were soon more or less forgotten.

Personally, they somehow remind me of the post-war architecture of Berlin’s much more pompous and less “modernist” Karl-Marx-Allee (or “Stalinallee” as it was known back then). Just as the “Stalinbauten”, the Woodberry Down blocks were also strikingly modern for their inhabitants: central heating, built-in wardrobes and elevators were only some of the contemporary features that most Berliners and Londoners back then could only dream of. 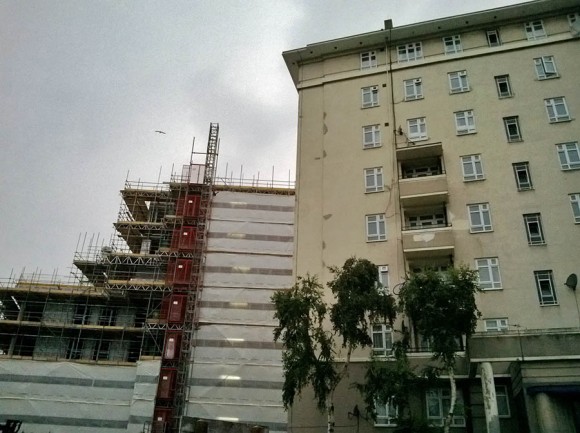 It’s a bit strange to think that Nicholl House, one of the first two blocks to be completed, provided a scene setting for Schindler’s List. No doubt was this estate chosen for its morbid charm. It’s currently oozing it in no small doses. Most flats are already vacated and the wrecking balls have started to do their work. This piece of architectural history will be no more in just a few months’ time.

What will develop in its place is of course an entirely different story. A large developer, Surrey-based Berkeley Homes, is tearing down the entire estate and in its place is building a mixture of subsidised social housing and privately owned flats. If they decide to stay, the 2,000 or so families already living on the estate will see new neighbours move in: in order to cross-subsidise the “social” aspects of the project, another 2,700 homes will be built and sold to private individuals – which largely means foreigners these days. 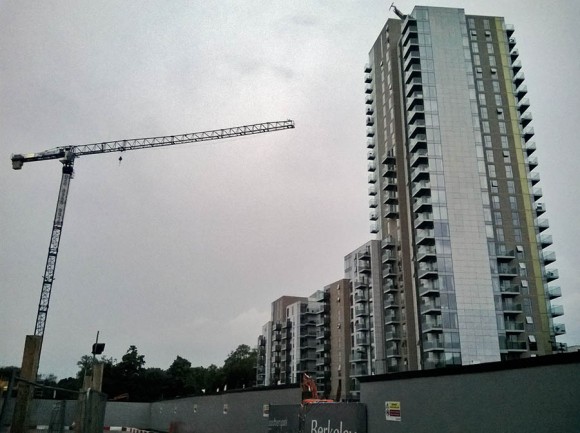 There have been very few stories on this process, and the ones that are available are perhaps unsurprisingly alarming given their source. Nonetheless, the concerns voiced there need to be taken seriously. A few friends and I sat in the local pub here just a few weeks ago. I’m wondering what the locals’ opinion would have been had we asked them about it. What decisions have they taken now that their houses are being torn down? Will they settle for cash or choose a likely smaller flat in the new buildings?

If they decided to opt for a cash settlement, they will face unrelenting house price inflation. Just talking to friends here over the past two weeks has driven home to me yet again how over-the-top the real estate market in London has become. People are talking GBP 300-400k for a two-bedroom flat, and that’s the lowish end of the scale.

Especially Hackney is facing the strange situation that its property market is booming while the proportion of inhabitants living in social housing is much bigger than average figures for London and England. It’s a tale of two halves. Projects like Woodberry Down will likely not help bridge the gap. Whether or not they will at least bring these two halves together, only time will tell. 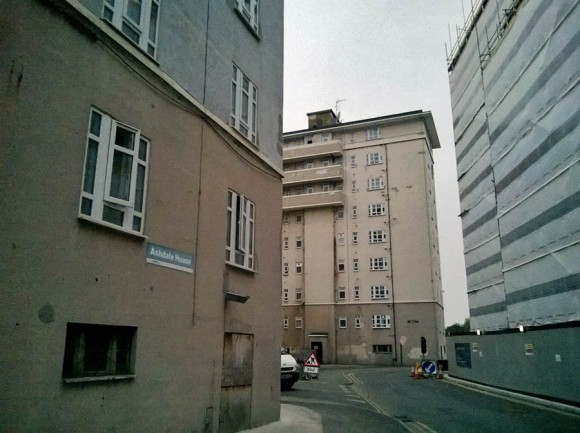 A lot of the above is from a great article about the genesis of the project and its architectural significance on the Hackney Society’s website here.

2 thoughts on “Woodberry Down”