This Art Deco building on Commercial Road near Shadwell DLR caught my eye when walking the area recently. Cheviot House was built in 1937 for textile merchants called Kornberg & Segal. The local Tower Hamlets borough apparently has plans to demolish the building and earmark the plot for new residential development. 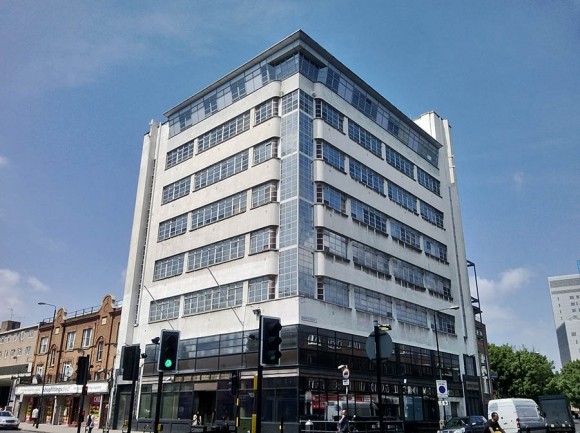 But first back in time: only eleven years after Cheviot House’s completion, the textile group had either gone bankrupt or moved elsewhere. At any rate, in 1948, the building was adapted as Stepney Town Hall and has remained public property since then. It is now a housing authority office, with much space inside apparently not in use.

Cheviot House played a significant role in the wider area’s cold war infrastructure. Its basement had already acted as a bomb shelter during the second world war. In 1953, the structure got strengthened and upgraded and became Stepney Borough Control, i.e. the local bunker.

An admittedly small group of local residents is protesting against the Tower Hamlets Borough’s plans to demolish the building and use the plot for new residential projects (here’s their Facebook page, here a local newspaper article).

Campaigners demand the building to be restored to its former glory and once again used for public purposes. They say that current plans to build a new council town hall from scratch are certain to be expensive and that money would be better spent on Cheviot House.

There’s a great stock photo from the year the building was completed.