After strolling around and visiting the Museum of Modern Art Tokyo today, I took a rather long-winded walk towards Ichigaya Station to catch the Nambuko Line home. This took me past the infamous Yasukuni Shrine. It was already late and dark, so I didn’t stick around for too long (although the sight of the shrine is beautiful at that time of the day).

The shrine is devoted to soldiers who have died fighting for the Emperor. More than two million souls are remembered here, among which there are also some war criminals. I have come across the shrine frequently recently (e.g. the LDP leader and former PM Shinzo Abe paid a visit to the place last week) and it made me think again of one of my “assignments” while here: How is the wartime remembered in Japan? How is the collective memory embedded in education and popular culture? 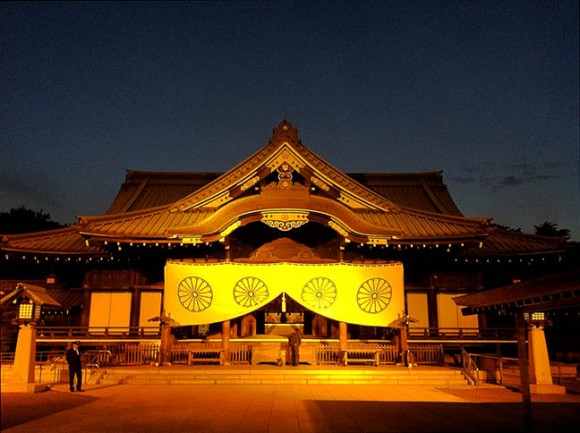 Japan has a fairly strong political representation of nationalist and revisionist views, and the infamous Oyoku Tandai black vans are to be seen frequently on Tokyo’s streets. Political leaders often attempt to appeal to nationalist circles by visiting the shrine and by sounding “patriotic” on everything from foreign politics to textbooks.

Yet what about places of commemoration? While touring Japan on a rail pass in March this year, we visited Hiroshima’s Peace Memorial as well as the Kyoto Museum for World Peace. I found that these two museums deal differently with the war and the question of Japan’s guilt. In Hiroshima, I found a very touching and numbing, yet somewhat descriptive take on the event in August 1945.

In general, my impression was that a lot of the Japanese campaign to prevent another Hiroshima and Nagasaki finds its starting point in the actual detonation of the bomb, not necessarily the genesis of the tragedy. By that I mean that the history leading to the American military’s decision to drop the world’s first atomic bombs. In the words of a BBC article from 2008:

People here can be heard wishing for world peace in a tone that to Western ears might carry a touch of naivety, like a leaf torn from the book of beauty pageant contestants.

Anyway, the Kyoto museum was a bit different. It had ample space dedicated to the militarist culture of the pre-war Showa era and in how far it can be directly linked to the nuclear atrocities committed against the Japanese people in 1945. All in all, a more differentiated view on history, I thought.

I will try and articulate some of these feelings a little better over the coming months. First I’d like to visit the museum next to the Yasukuni Shrine. Then a lot of reading will be necessary, and who knows, perhaps I’ll revisit Hiroshima and Kyoto and even go to Nagasaki.